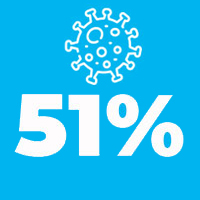 A new study on Duke University’s coronavirus testing and surveillance strategy highlights the importance of widespread testing of asymptomatic individuals to prevent transmission and provides support for the feasibility of a pooled testing approach, in which multiple samples are combined in a single test.

The study based on real-world campus testing data adds to the evidence in support of frequent mass testing of all students on campus. Over the course of the first 10 weeks of the fall semester, Duke conducted 68,913 tests on 10,265 students. Asymptomatic testing was scaled up to testing targets, which include testing for residential undergraduates twice weekly, off-campus undergraduates one to two times per week, and graduate students approximately once weekly.

Duke employed a two-stage testing strategy where the first stage used a sensitive test in a low-prevalence population, and the second stage used EUA clinical tests in the identified subset of samples where the pretest probability was higher.

Among those tested 84 were positive for SARS-CoV-2, and 51% were among persons with no symptoms. The pooled screening resulted in 158 positive pools that, upon deconvolution, identified 29 (18.4%) confirmed cases.

51 %
More than half of the students were asymptomatic, suggesting that infections would be missed with only symptomatic testing
10265
10,265 students were tested from August 2 to October 11, 2020
0.08 %
High frequency testing helped to determine the per capita infection rate as 0.08%

Disclaimer: Scientific articles are presented for educational purposes only and are not intended to promote any Beckman Coulter product or service.  Opinions and conclusions are those of the respective authors and not Beckman Coulter.